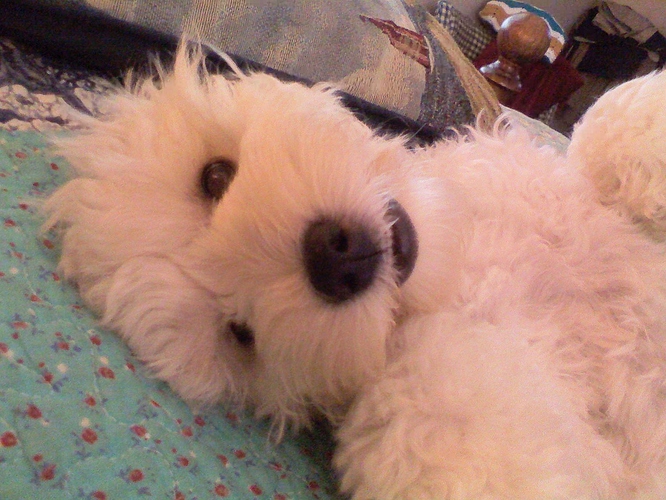 upload.jpg1600×1200 243 KB
This may have already been discussed but I thought I would talk about it again. Pets are used for so many therapies and I personally believe that they could greatly benefit those of us who suffer from Fibro as well. I have 3 dogs and I know that is a lot for someone who is chronically ill but they keep me going. They understand when I feel bad, they love unconditionally and they are always glad to see me. :-) Lucy - the pup in this picture came to live with us in April and I never thought I would be able to have a puppy again - way too much work. Well it hasn't always been easy but she has been the best medicine I have ever had!! Would love to know how many others have pets that help them get through the day.
purplebutterfly September 13, 2013, 8:08pm #2

I have a boa named baby she is great. A new dog named lightning part wolf part rottwieler 5 cats in the yard that are strays that come to eat and chase the squirlls. A fish named fish. A germanshephard named Jacks.

Isn't it funny how we all have a different array of pets. We also have a cat - she is a 7 year old tuxedo cat and she is very funny, especially with the dogs. :-) They all bring more joy than I can express.

Your pup Lucy looks lovely, I have 2 cats, Basil and Sybil, both rescue cats, I love them soooooo much.

Now that I am at home more, having given up work, I find them such lovely company. Little Sybil follows me everywhere and very often comes up with me for a little nap in the afternoons.

Basil is more lively and likes to be out more in the day but if it's chilly he loves to curl up on my knee or in front of the fire for a snooze.

They are so entertaining! They race round the house together, come down the stairs at such speed and come to a sudden skidding stop before they crash into the front door!!

They wake us up at about 6am ! Sometimes I just pull the covers up more and ignore them, but Basil then starts on my husband and licks his bald head to get him to wake up and get them their breakfast!! He blames his bald head on basil, says he's licked all his hair off!! Nothing to do with being 52 !!! 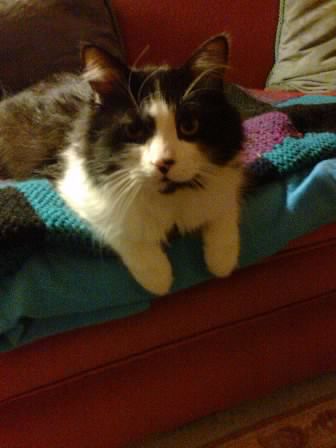 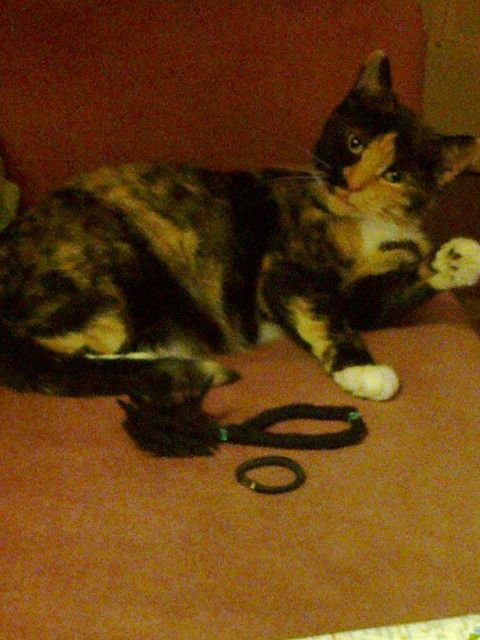 Oh they are just beautiful!! I did have a calico and she lived 20 years before she died. They sound wonderful. :-)

Oh my gosh Pam - they are both just adorable!! I can't wait to get Lucy's hair cut and shaped up. My other two have short hair so they are fairly low maintenance. :-)

My sis and I live together. Collectively we have 5 dogs and 3 cats between us. 4 out of the 5 dogs are bite sized and the 5th was supposed to be as well. We purchased him as a Cockapoo but he somehow morphed into being a medium sized Wheaten Terrier! I know how puzzled I was when he was beyond hungry when I feed him what the pet store told me to feed him, but it wasn't until week 2, when he'd doubled in size and was already almost as big as our other Cockapoo, that I realized the poor boy needed more to eat. And boy, did he!

I also couldn't figure out why he became so leggy, then suddenly his body filled in and he became boxy shaped. And his torso grew almost as long as mine! And although both the pet store and vet said he'd grow no bigger than 20 lbs, he got to 37 lbs when full grown, without any fat on him.

I know I sound rather thick but I trusted the pet store and it seems to me that our vet should have become clued in when he became an adult dog that he was a Wheaten Terrier, NOT a Cockapoo! It wasn't until my sis took him to a new groomer that she was clued in to his true identity. No wonder he was so stubborn and refused to learn simple obedience commands that any Cockapoo would have aced! Terriers have completely different personalities because they had different jobs to do when they were working dogs. Cockers and Poodles were both game dogs. Wheatens were dogs that farmers had to keep away vermin and to fight off badgers. Badgers are notoriously mean and strong, so any dog going up against it needed strength and stubborness. (Ask any Dachshund about that.)

The moral of this story is that neither my sister nor I ever would have purchased him as a Wheaten Terrier because years ago I had another type of terrier and i know how stubborn they can be, as well as occasionally destructive (mine tried to fight my tiny Chihuahua and came dangerously close to snapping his head off, so Willie the Scotty needed to find a new home.) BUT Duffy's such an incredibly sweet dog that I love him to death. He just lights up my day! Oh yes, my little pups also give me much joy but he is so goofy and loveable that I find such comfort during this horrible illness from his feisty spirit.

The cats, well, they are typical cats; two are a little grumpy and resentful that i refuse to let them outdoors but I think they grudgingly somewhat accept their "servitude."

BTW, Linnie, your dog Lucy is a real beauty! I cannot tell the scale of her to the room, so she could be anything from a medium sized Wheaten to a smallish Cockapoo or even a Bichon. Can you please tell me what your beauty is?

PS: Love the Schnauzers too! What cuties they are! As are Lucy's pretty rescue cats. They sure look so mellow! And I haven't opened the jpeg files because my computer freezes up when it has too much in its memory, like photos (it's only a lowly netbook.)

Petunia - I have had a couple of dogs over the years that turned out not to be what I thought they were. I have a cocker spaniel that was AKC registered and I got him at about 8 weeks. He was just adorable and I loved him so. by the time he was around six months old he could eat food off the stove and was completely out of control. We went back to the breeder and she said that he was not the dog she sold us. AKC took his papers and the whole litter. We could never train him at all and my boys were young and he would trample them. We found a young couple who lived on a large piece of land and they wanted a barker to keep the wife safe while the husband worked. I still remember with delight the sight of them driving away with him in the back seat of their little car. He was as happy as a clam - it was as if he knew he found great parents. Lucy is a maltipoo we think but no one is sure. She is a rescue - someone else had taken her and couldn't keep her because their larger dog was too rough with her. She is at almost 13 pounds now and 7 months old. I am just hoping she won't get too very tall - right now she is a shortie. :-) She is a good girl and very spirited as well.

Rachel I have had my snake baby for many years she is great for getting rid of unwanted quest. She even has a pool she gets in of a summer. You should see the looks on the neighbors face.